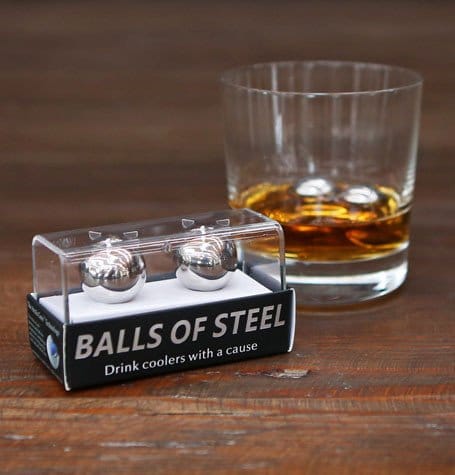 It’s a creative title that grabs your attention from the get-go, but don’t let that fool you, Balls of Steel Whiskey Stones are the crème de la crème of chilling rocks.

So What Exactly Makes Balls Of Steel The Best Whiskey Rocks?

When drinking whiskey, or any liquor for that matter, it’s preferred to keep your drink cold and at a consistent temperature while you enjoy that delicious nectar of the Gods. Some prefer clear, some prefer brown, each to their own, but at it’s core it’s the same.

Balls of Steel win the contest by keeping your drink colder and keeping it colder for longer than pretty much every other alternative there is on the market. Doesn’t matter whether you’re using soapstone, granite, bone, stainless steel, ice cubes or even some NASA designed titanium-tritium alloy hybrid (okay maybe that last one would be better, but you’d have to mortgage the home to afford it), nothing else really comes close to them.

But how can they do this? I hear you ask.

Balls of Steel have a proprietary center called Arctic Core - Such a good buzzword.

They claim to have spent months researching and developed a material that is better suited for chilling and keeping cool drinks. They won’t tell us exactly what that is, but we can delineate how it works at least.

Read Next: The Best All Grain Brewing Kit Reviewed.

It appears they have developed something that has a higher thermal capacity than most of the other alternatives (technically it’s specific heat capacity, which tells us the ratio of the amount of energy (heat) added to (or removed from) an object to the resulting temperature change). And they have also created something with a lower thermal conductivity (the ability of temperature changes to pass through a medium).

Here’s a good analogy to better understand how this works. Imagine you have two objects full of water: a bucket (Balls of Steel) and a water balloon (regular whiskey stones). You take a pin and prick a hole in each of the objects. What happens? The water balloon explodes all over you, while the bucket continues to leak a fine trickle for quite some time. The flow of water is like the cooling effect of the rocks - Regular whiskey stones chill liquor faster but the effects are over quickly, while the Balls of Steel continue for a longer time, but are in the beginning a little slower.

Okay, probably a way oversimplified analogy but I hope it paints the picture.

The have combined this proprietary high thermal capacity core with a stainless steel exterior, a marriage which combines the best of both worlds. You can see some of this behavior in the testing performed below.

Check out the comparison between ice cubes and Balls of Steel whiskey stones. 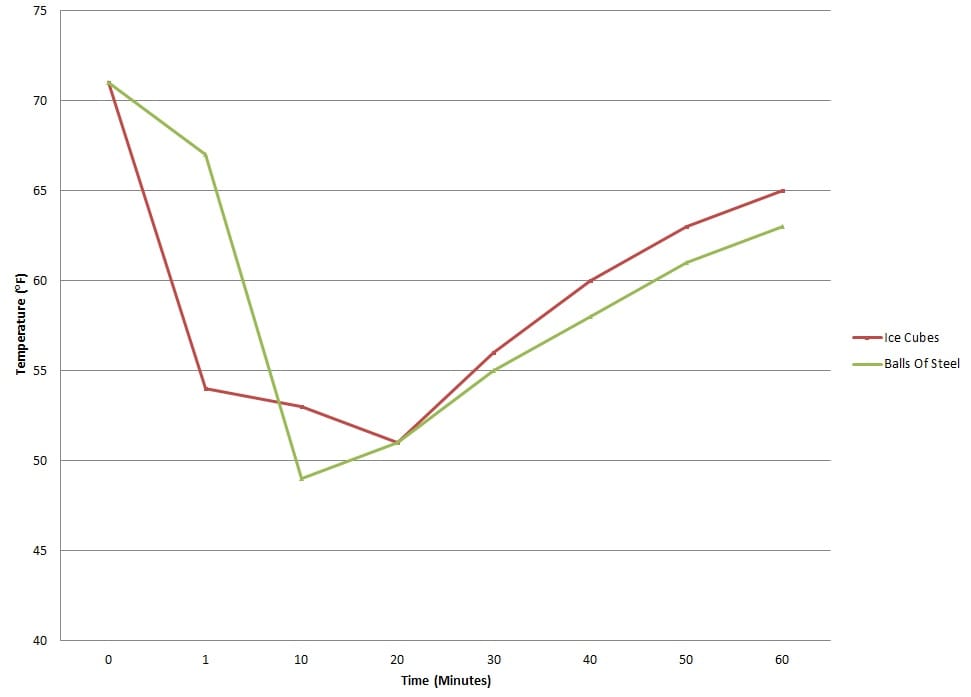 So you can see while ice cubes chill drinks much faster (you get around a 10 degree difference at the 2 - 3 minute mark), after about 10 minutes the Balls of Steel really show what they’re made of by reducing the temperature down to around 49 Fahrenheit. This is in contrast to the 53 Fahrenheit temperature achieved by ice cubes.

We then see that throughout the duration of the experiment, the Balls of Steel maintain a cooler temperature by approximately 1 Fahrenheit.

Hmmm but the trend looks a lot like ahem, water. Could the proprietary Arctic Core be, water?

I guess we’ll never know unless you choose to cut one open. Even if it is water, that’s still a damn smart idea.

Additionally, the creators over at OriginalBros have some fantastic business ethics at play. They have stated that for each sale they will be donating 15% of their profits to cancer research for men. You don’t see that everyday folks.