Update: The top-rated Hobart 110V MIG welder is currently on sale. Click here to check out the deal.

Buying your first welder is not easy task: indeed, with the overwhelming number of models and features to choose from, a first-time user can certainly feel daunted by the task. Your choice of welding machine depends on a variety of factors, including the number of times you will use it, wattage, type of project you will use it for and the likes.

Here are a few tips to help you find the best 110v mig welder according to your personal preferences.

READ NEXT: These Vertical Gas Smokers Will Have Your Meat Smoked To Perfection

If you’re on a limited budget, it’s always a good idea to opt for a kit that comes with the different accessories that you might otherwise need to buy to be able to get started on your project. Most welders do come with welding protection accessories such as helmet, gloves and hand shield. Some models may even include extra spools and wire.

Customers can often choose between Stick welders, TIG welders and MIG welders. MIG is more popular since it’s less expensive without compromising on features and power. MIG welders are also more suited to beginners since they are very easy to operate and can be used for different types of projects. These welders normally come with a wire feeder, which means that your machine will operate at least four times faster than Stick or TIG welders.

Again, this largely depends on the type of project that you’re working on but generally speaking, machines with a high power output can be used on thicker slabs of metals. However, it’s important to know that high-voltage welders cannot be used straight out of the box. Instead, they do require a specific power supply set up system. On the other hand, if you want the job done quickly, it might be best to go for a lower voltage which will ensure that you can plug in and use the welder as soon as you unbox it. 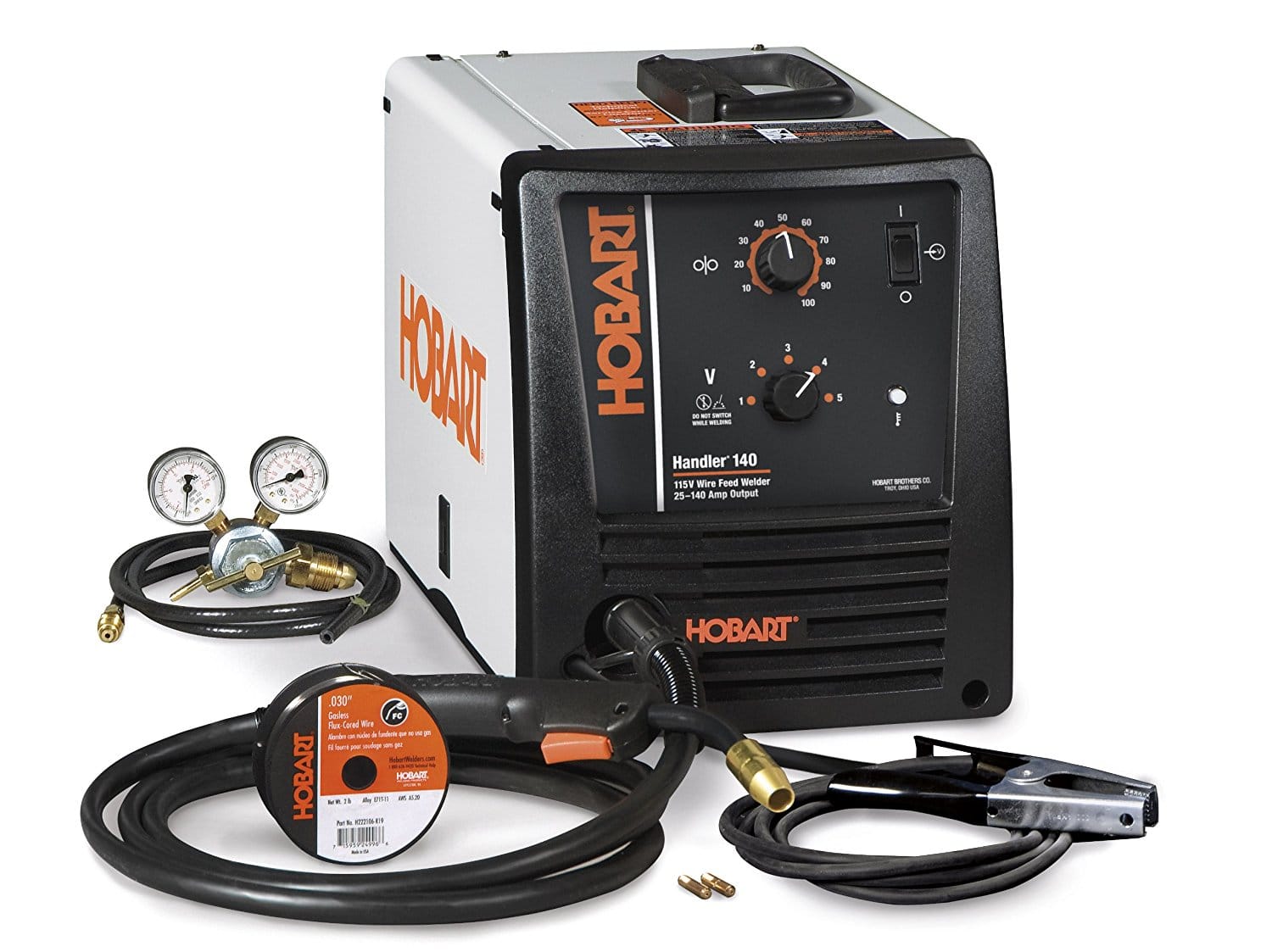 If you want to buy one of the best 110v mig welders, you might want to check out the Hobart Handler 140 Wire Welder. With a power that varies between 25-140 amps, this wire welder can be used to weld 24 gauge to ¼” mild steel. The majority of people were positively receptive of the drive system that’s made from industrial cast aluminum, hence providing solidity and stability when in use. This also protects the outer shells from general signs of wear and tear, ensuring longevity. With the boxed packaging, customers received several accessories such as a set-up guide, manual, 8 inch spool adapter, flux-cored wire, contact tips, power cord as well as a cable and clamp. 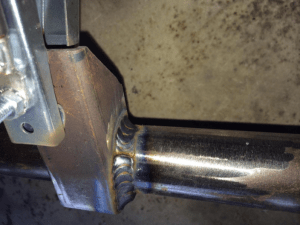 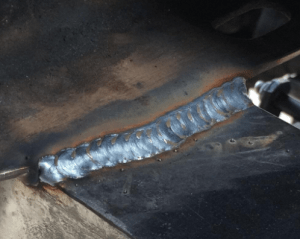 Because it is so easy and straightforward to use, customers simply need to plug it in and it’s ready to go. It is on the more expensive side for a 110v mig welder, but it is pure unadulterated quality.

While the majority of people were extremely appreciative of the machine’s performance in general, some people did face a few minor issues with the wire feed.

The K2185-1 can be used to weld both flux-cored and MIG. Among the best 110v mig welder, this handy apparatus can additionally be used to weld up to 1/8” mild steel. This particular model received plenty of positive reviews, especially because it’s so portable and easy to use. Measuring 18 x 11 x 17 inches for 49 pounds, this welder also features an adjustable wire feed speed control, which most customers seemed to like. 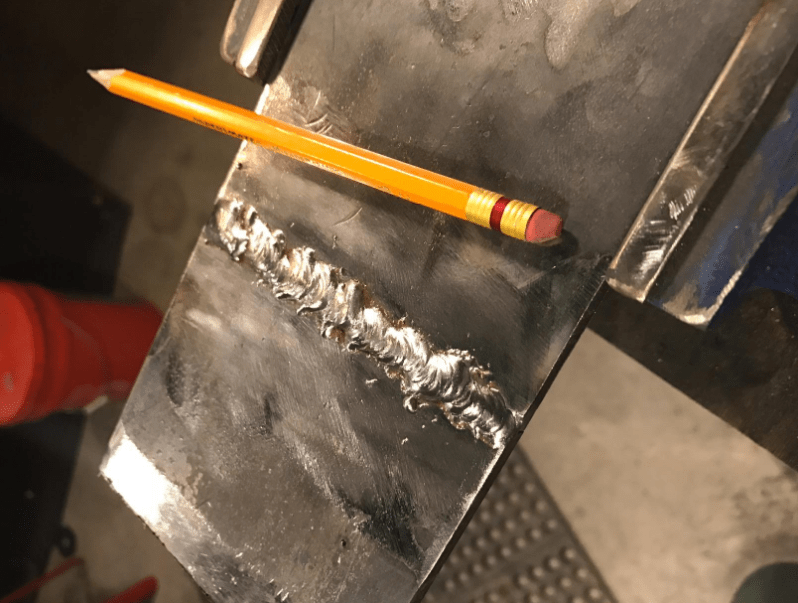 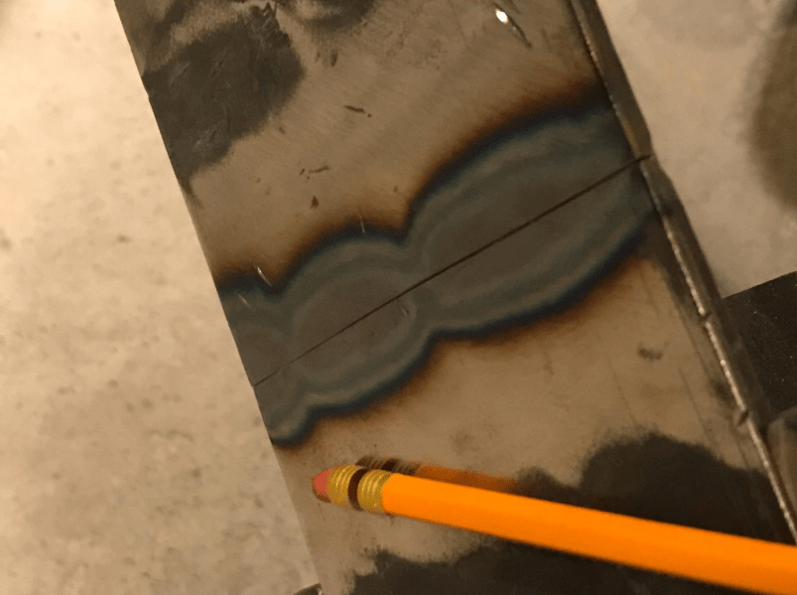 You can see that even though it’s recommended only up to 1/8” mild steel, it does a great job at welding 1/4” steel plate. The weld isn’t the greatest, but what can you expect for a beginner?

According to its reviews, most people were also very appreciative of the handy accessories that came with the boxed packaging. These included a chipper hammer/brush, welding hand shield, contact tips, MIG wire, spool, flux-cored wire, hose, gas regulator and gas nozzle, among others.

Hardly any negative feedback was reported for this welder. 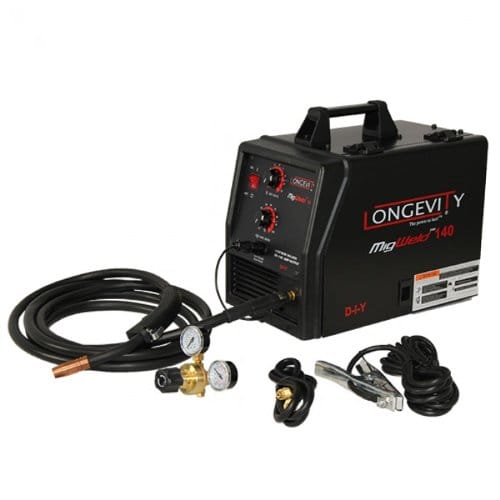 Rated among the best 110v mig welders on the market, the LONGEVITY Migweld 140 - 140 Amp Mig Welder comes with a power plug and operates on any standard 110v outlet power. Ideal for heavy-duty, this welder has been very well received by the majority of customers. Most people were pleased with its built and structure that ensures a powerful performance. According to customers, this apparatus can weld up to 3.8” of mild steel. In addition, it is very easy to operate- even for beginners- and comes with its wire. Ideal for gasless welding, this machine also has the advantage of being highly portable and measures 16 x 14.5 x 9.6 inches for 54 pounds.

A few drawbacks were reported about it: some customers complained that it was on the noisier side, which made it difficult for them to use the welder at night or in apartment buildings. 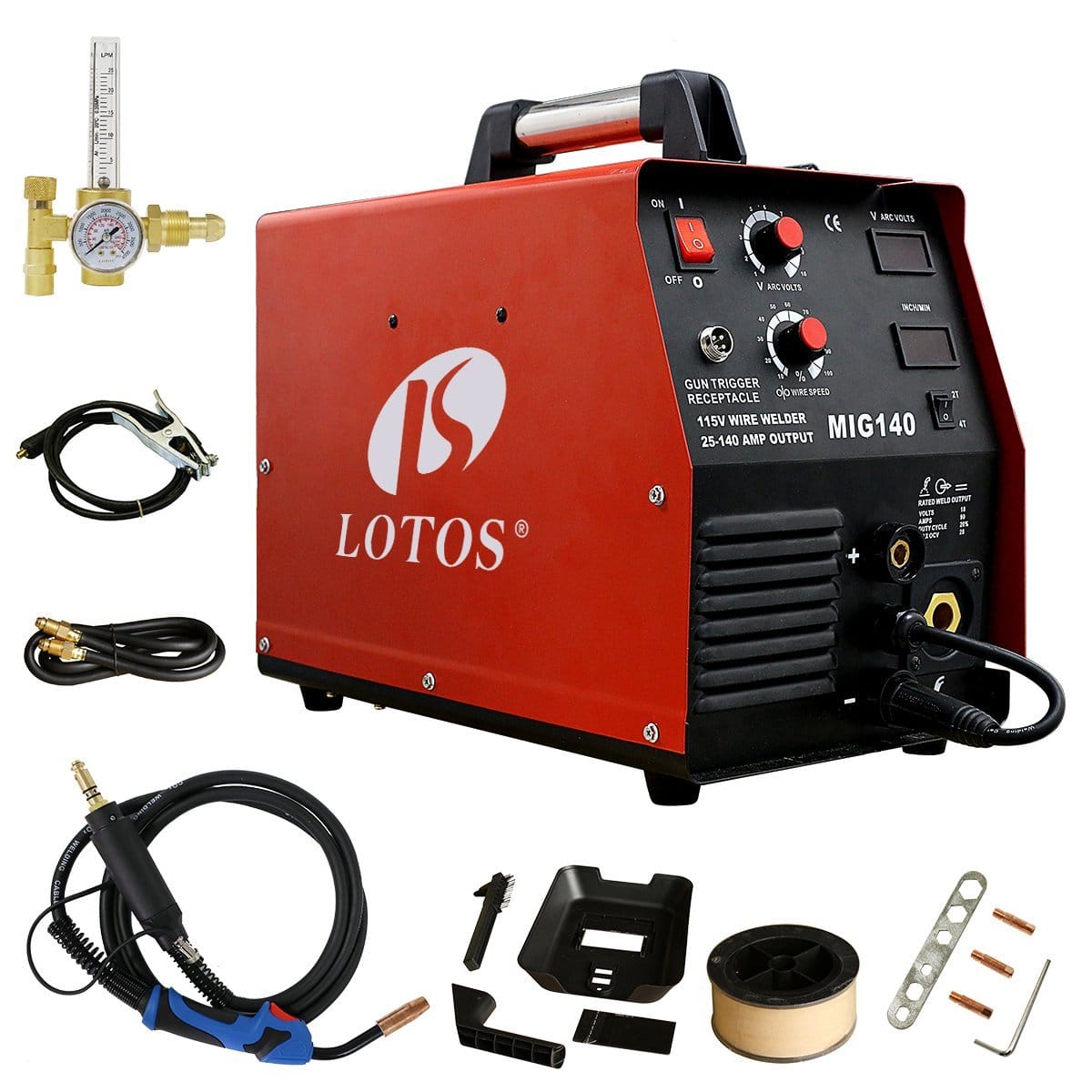 Available in red, the Lotos MIG140 is a highly durable and reliable welder that can be used for different types of metal materials such as aluminum, mild steel and stainless steel among others. According to customers, this apparatus has the following welding capacity:

Made from solid aluminum, this welder is enhanced with Transformer Technology that has been proven to be among the most reliable on the market. As a result, customers could easily connect their MIG140 to their 110V wall outlet and quickly set up the machine within a mere matter of minutes. 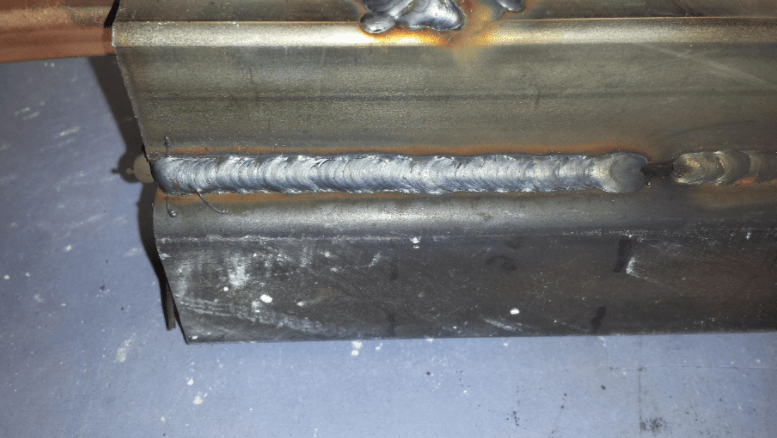 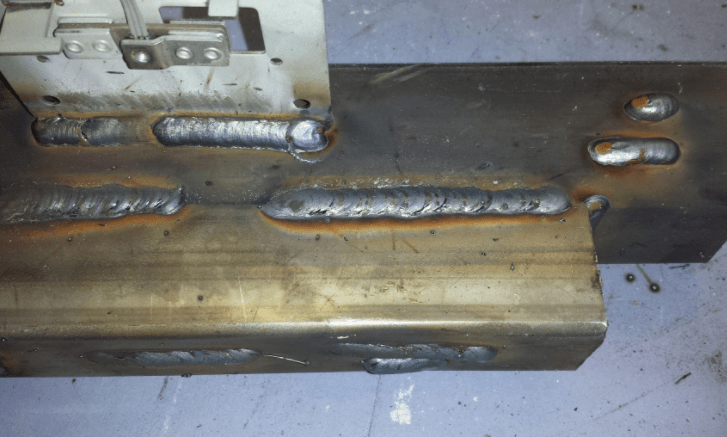 Customers were additionally receptive of the machine’s industrial standard 8” and 4” wire spools along with the thermal overload protection system. With this apparatus, it is also possible to make the most out of the full-adjustment drive system which can be activated to largely reduce the risk of wire crushing and tangling.

Very few negative feedback were reported about this machine. A handful of customers did complain about the noise but most people were quite satisfied with its performance which is why it’s considered among the best 110v mig welders on the market.

If you want to buy one of the best 110v mig welders, you might want to check out the Hobart 500559 Handler 140 Wire Welder. With a power that varies between 25-140 amps, this wire welder can be used to weld 24 gauge to ¼” mild steel. Because it is so easy and straightforward to use, customers simply need to plug it in and it’s ready to use. It is on the more expensive side for a 110v mig welder, but it is pure unadulterated quality.

The majority of people were positively receptive of the drive system that’s made from industrial cast aluminum, hence providing solidity and stability when in use. This also protects the outer shells from general signs of wear and tear, ensuring longevity. With the boxed packaging, customers received several accessories such as a set-up guide, manual, 8 inch spool adapter, flux-cored wire, contact tips, power cord as well as a cable and clamp.

While most people were in general very happy with the machine’s performance, the wire feed caused some minor issues to some of them.

READ NEXT: Who Knew They Made Flashlights This Good For Under $20? 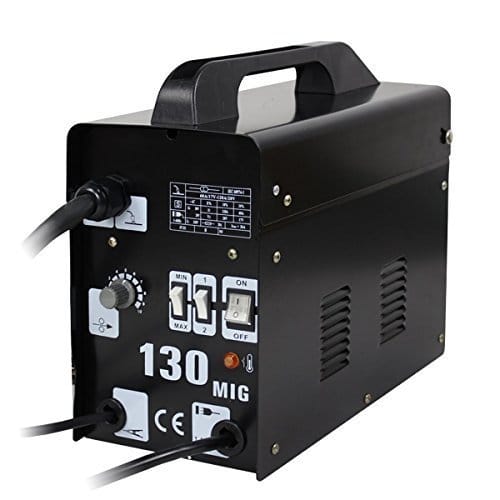 Be wary when buying a product like this. If you look closely in Amazon you will see that the exact same product image is used under different brand names. This can be a tell-tale sign of a low-quality Chinese product. To make it seem like a great deal, they will often have the product heavily discounted from a high price - this is just marketing tactics. The welder would never receive the full price.

But is it all that bad?

Thanks to its positive feedback, the MIG 130 AC is considered an alright 110v mig welder. With a duty cycle of 10% at 105AMP and 35% at 60AMP, this welder has the following capacity:

Most users liked its additional features such as the on/off safety control as well as its built-in torch. Customers additionally praised its variable feed speed which, according to them, made it far easier for them to operate the machine. Upon purchase, you will also receive different additional accessories such as the ground cord, extra 2 tips, 2.5M torch, wire brush, chipping hammer, welding face mask, spool wire and an instruction’s manual.

As far as the drawbacks are concerned, a couple of customers thought it was a bit on the noisier side but this complaint wasn’t popular.

If you’re looking for the cheapest possible option and only need a few welds done, then it’s probably an okay idea. Remember that there does seem to be some product issues with these, 1 in every 100 or so come off the manufacturing line faulty. Recommendation is to spend a little more and get a more reliable model with better warranty. 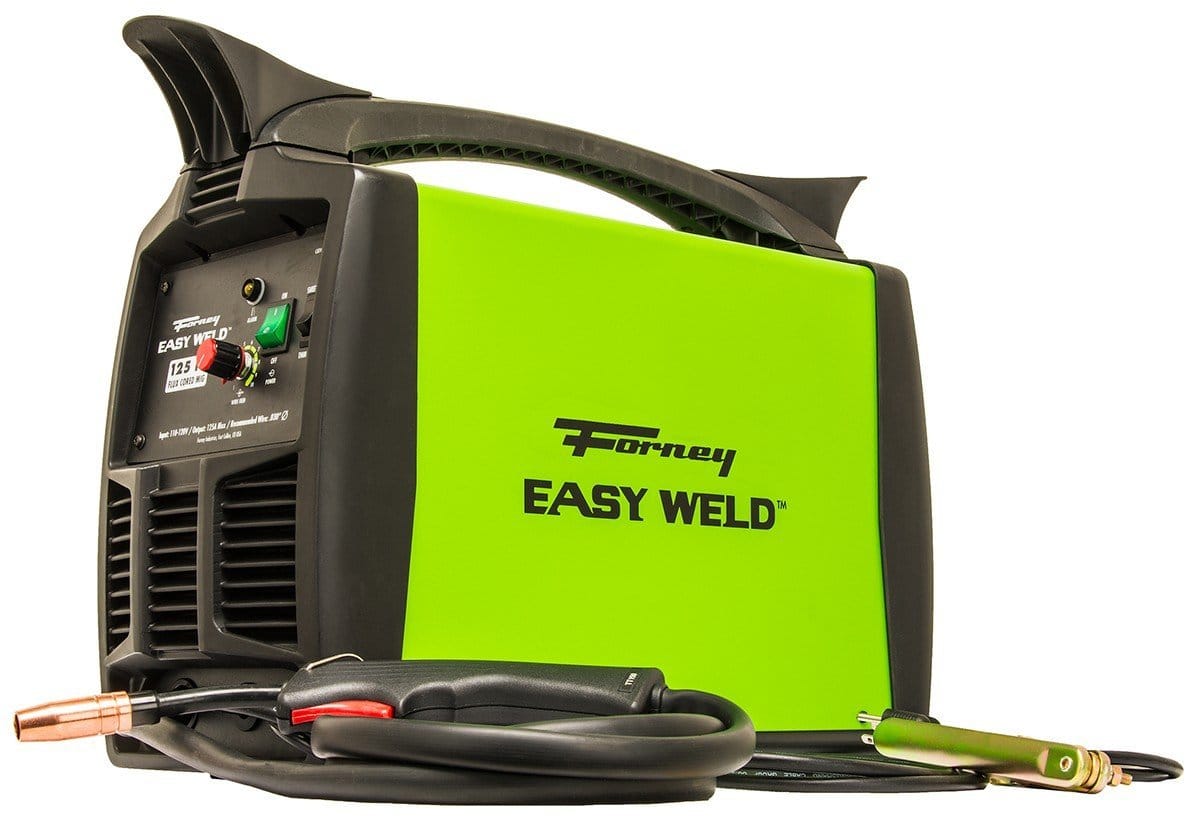 It’s no Lincoln or Miller, but this bad boy can weld! 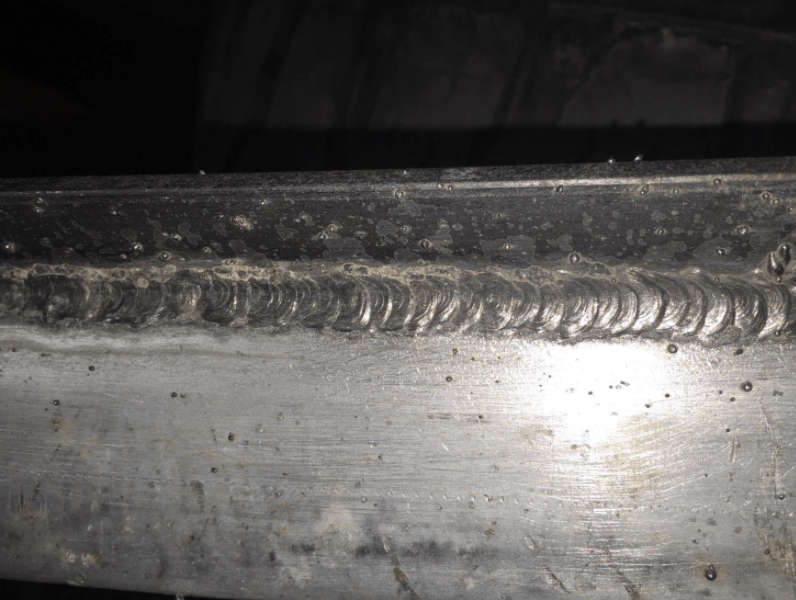 Buyers also liked its simple plug-and-play feature which saved them the time and trouble of having to set up the apparatus. With an amperage of 125 amps, this welder can weld up to ¼” (though it may lack the penetration required give a quality join), and even has the capacity to run 10 pound spools. The ideal starter tool for beginners, this product is very versatile and can be used for different types of projects.

The one thing that customers didn’t like was the warranty which was limited to 6 months only. 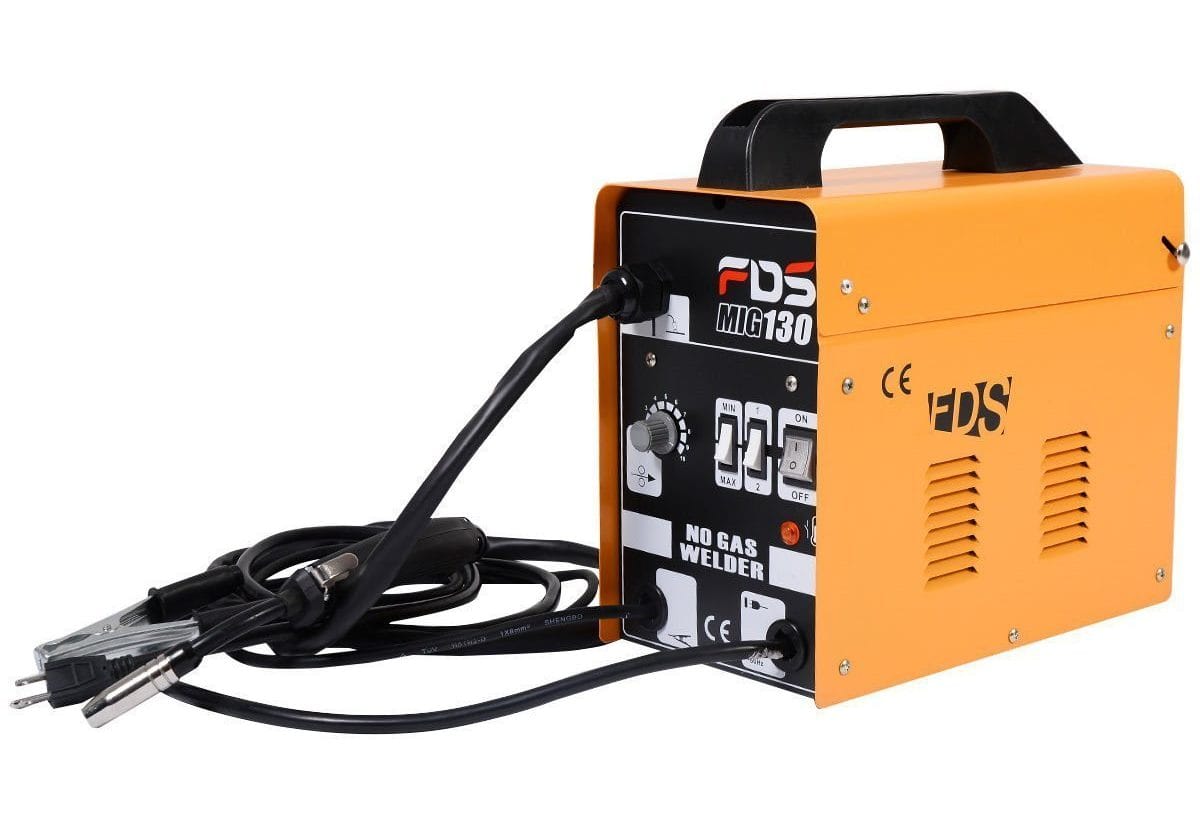 Made from steel, the MIG 130 by GoPlus is one of the best 110v mig welders because it delivers an excellent performance that pairs beautifully with its solid frame. Designed to provide a professional finish, this particular welding machine received several positive reviews, especially because of its versatility. Indeed, several customers praised its durability along with the fact that it can be used for car bodywork, general welding and the likes. Most people were even successfully able to use it on thin steel.

As far as the drawbacks are concerned, this product received mostly positive reviews. One user did complain about the structure, which he felt was too lightweight, but this opinion was not shared by other customers.

READ NEXT: Check Out These Awesome Whiskey Decanters (There’s One Shaped Like A Bull).